Hi everyone,
Sorry I’ve been gone for so long, I was just in the process of moving from the Bay Area down to Southern California & I’m still somewhat adjusting & settling down so I’ve been REALLY busy. It’s taken me over four days to get this post up because I keep stopping & starting.

I’m not sure I want to reveal exactly why I moved down to SoCal for privacy reasons, but I’m sure as time passes I’ll end up talking about some stuff.

Anyways, I’m a HUGE fan of Beauty & the Beast, so any type of re-telling or story that’s vaguely associated with it, is going to grab my attention. That’s exactly what Beastly is! Also, they’ve made this book into a movie that’s yet to be released, although from the previews, it looks a LOT different from the book so that’s going to be annoying. I’ll still probably see the movie anyway just for comparisons sake. 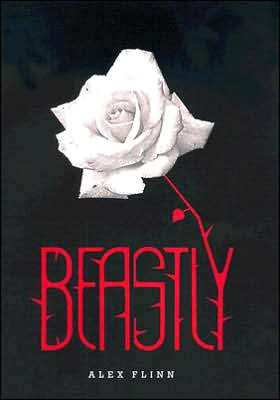 Available for $8.99 at Borders. Pic Credit goes to: lafemmereaders.blogspot.com

Beastly is a modern day re-telling of Beauty & the Beast told from the Beast’s point of view. This book is a Young Adult novel so it’s geared mostly towards pre-teens and teenagers. Despite the fact that, in my opinion, it’s not really meant for someone my age to read – I’m 20 – for the most part I enjoyed this book for a bit of light reading. Haha, saying that makes me feel like Hermione, & if you understand what I’m talking about you totally ROCK! I’m not going to talk about the plot because probably everyone knows the story of Beauty & the Beast & if I get too detailed about the way the book retells the events of the stories then we’ll get into spoiler territory!

Pros/Cons: I liked the way Flinn wrote Kyle (the Beast). I felt like his voice was really honest & typical of a teenage boy. Unfortunately, I felt the complete opposite about the way Linda (Beauty…I liked the use of this symbolic name. Linda in Spanish means beautiful!) was written. Her voice felt very fake & forced. This is ironic to me because the book was written by a woman & usually women are better at tapping into their own gender. I liked how the story was sort of a mix of the original tale, plus the Disney version, & many other aspects from transformation stories. I feel like the author really did her homework when researching fairy tales. Another thing I really liked was the chat room sessions. I thought they were SO clever and a great way to incorporate other transformation tales & subtly encourage readers to read those other stories. I did think the ending of the book was kind of just thrown together/rushed. The rest of the book is paced very well so you aren’t getting too much information all at one time, but for some reason the ending felt like WHAM! BAM! LET’S TIE THIS ALL UP, GOTTA GET THIS BOOK FINISHED!! & yes, the twists are somewhat predictable, but that’s kind of hard to escape with a book that’s retelling an already popular story.

Rating: B+. For me, this book was just okay. You can’t really mess with the perfection that is the original story, so I didn’t anticipate this book being outstanding, but it was fairly decent. I can appreciate the author’s version of the story & the obvious hard work she put into it, but this book isn’t making it on my bookshelf. My bookshelf is home to the “A” grade books such as Wicked by Gregory Maguire, Home, a memoir of Julie Andrews’ early years & Spencerville by Nelson DeMille, just to name a few. I’m glad I read it & I may even go pick up some other books by Flinn, she has several other fairy tale remakes, just to see how she interprets/modernizes those stories. Also, at the end of the book there’s a little author’s note in which she talks about some of the books she read to help research for Beastly & they all sounded pretty interesting, so I’ll probably add those to my list of books to read. All in all, if you’re into fairy tales, go pick up this book & give it a try. It never hurts to read more literature, . In all seriousness, it never hurts to add more literature into your life & we’re all entitled to our likes & dislikes 🙂

Let me know if you’ve read this book, plan on reading it, plan on NEVER reading it & your opinions. Tell me if there’s other books you’d think I’d like based on this review. Thanks for reading, stick around!

One thought on “Book review! Beastly by Alex Flinn”