Today I’m going to be sharing with you my experience getting Eyelash Extensions and 1 Fill with Ally Nguyen of “Ally’s Lashes & Skin Care”. Look at the bottom of the post for Before and After pictures!

I gave my experience with Ally 3 stars. I’m not 100% sure what lashes I started out with, but the Refill was 10C/11C Natural Set. The application process is really easy and pain free, but overall I thought the results were just okay & I’m not a huge fan of the Refill process. I found Ally’s services through Groupon. She operates out of “Exotica Day Spa” in San Jose, off Alamaden Expressway. Through Groupon I paid $79 for a “Full Set of Eyelash Extensions + 1 Refill”. Regular prices online are listed with the options for Natural $59 + Refill $50, Full $79 + Refill $55, & Dramatic $99 + Refill $60, however Ally mentioned that she offered specials that were not listed online.

First Application:
As I mentioned above, the application process was easy & pain free. I thought Ally was nice & friendly, but at the same time, she’s a salesperson, which I understand to a certain degree. She’s trying to make money to support herself so she definitely will try to upsell you the other Lash Packages. Unfortunately she does so in a way that I found very confusing and I’m not sure I can even properly describe here. She asked if I wanted Long, Full, or Natural. I told her I had the Groupon but wanted to discuss a game plan that would make my lashes look long & full, but still natural-ish, like I was wearing a pair of “Natural” False Eyelashes. That sounds contradictory, but if you wear False Lashes, you know what I mean. There’s a way to wear them that just amplifies & doesn’t look over the top, but there’s also a way to wear them that is dramatic & people know you have on Falsies, it all depends on what look you’re going for. I work in a fairly conservative office, so I didn’t want my lashes to look too crazy. She didn’t seem eager to listen to my game plan, she just kept insisting I pick a package and that my Groupon only offered so much & if I wanted them to be more Full or more Long I’d have to pay to jump up to the “Dramatic” Package. I understood all of that, but she was throwing so many figures and terms out that I became overwhelmed & decided to do ONLY what the Groupon offered. Having something written down would’ve definitely helped me make a more informed decision, but she told me later she doesn’t write down her prices because “her regulars know what she charges”. I found this odd because I’m not a regular so how am I supposed to know what’s going on? Later I found prices written down online, so I really don’t understand what she meant by that statement. I will address my thoughts on Ally’s personality in another section below.

Refill:
Ally makes you schedule a Refill appointment in 3 weeks or she doesn’t consider it a Refill – it’s another Set. I understand this logic, she doesn’t want ALL your lashes to fall out & then you come in for the “Refill” so she has to do the work of a Set at the price of a Refill. However, my lashes hadn’t really fallen out enough to warrant a Refill so I basically had a complete Set & then we added another set on top. Obviously I’m not a professional, but that’s what it felt and looked like to me. While my lashes were super thick and full, which was great for pictures, in real life they kind of looked like a bushy, tangled mess after a few days. While there were never any negative comments in general, only one person mentioned they noticed the original set. After the Refill at least 3 people made comments, something along the lines of, “Oh my gosh wow, you’re eyelashes are so…big!” etc. I was happy people noticed a change, yet at the same time, I felt uncomfortable because I wasn’t sure if they noticed because they liked them or because they were too over the top. The Refill lashes felt very hard & rubbery, which I didn’t notice at all during the first application. No butterfly kisses with these babies! Also, they fell out in clumps, no joke about 5 minutes ago, I had a clump of 5 fall onto my laptop. It does not appear that my natural lash came out with the clump so I’m guessing the glue dried up…? The most annoying thing about the Refill Lashes was that when they fell out, a majority of them got caught in the other lashes. I’d have this random clump tangled up among my other lashes and I’d have to pick it out with tweezers to avoid pulling any lashes that were still attached. It was a strange thing to experience.

Personality:
I’ve noticed in other reviews people have made comments about her personality and to some extent I think that’s unfair because the review is supposed to focus on the service you received. However, I realize that no one wants to give their hard earned money to someone they don’t like, so here’s a few things I noticed. My mom also had lash extensions done & we had totally different experiences. She felt that Ally was very quiet. When I was getting my lashes done, Ally played music on her phone & we had a great time chatting. I can’t say for sure why she acted differently, maybe she felt more comfortable with me because I’m young & we have the same name, haha! I was kind of uncomfortable during the Refill conversation because some of the things we talked about totally contradicted things she mentioned in our first meeting. Like I said, what do I care? She’s not my friend, it doesn’t matter to me what stories she tells about her personal life, but it was odd. As mentioned above, she is pretty direct about upselling. She communicates through text which I really appreciated because it’s annoying to play phone tag with someone when trying to make an appointment.

Overall:
As I mentioned above, I would rate my experience overall 3 stars. Based on my experience with Eyelash Extensions thus far, I could take them or leave them. I’m not absolutely in love with them, but I do enjoy having them because they’re pretty and convenient – for the most part. I was disappointed in the feel of the Refill lashes and the tangled mess situation. While I found Ally to be a…unique personality, I thought she was professional and polite enough. My main reason for not becoming a regular customer of hers is simply that I don’t see the need for eyelash extensions on a regular basis.

What do you think? Where do you fall on the Lash “spectrum”? – Do you have Eyelash Extensions, wear False Lashes, or just go with regular mascara? Let’s chat in the comments! Look below for my before and after picture! Thanks for reading 🙂 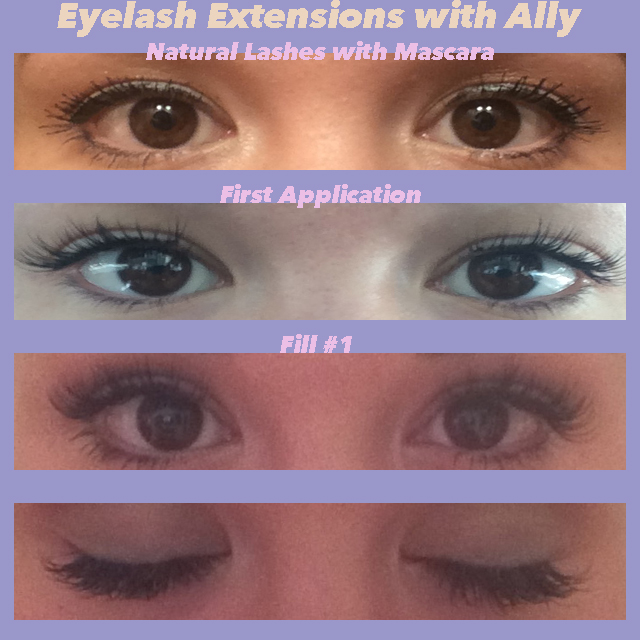