Looking for something to do this weekend?! Today’s post, a mix of a Collaboration, Event Recap, & Movie Review, will definitely provide an awesome idea!
On Monday, I was offered the chance to get a sneak peek of “Central Intelligence” – a new movie starring Dwayne Johnson & Kevin Hart that comes out THIS FRIDAY, June 17th! Thank you FabulousArizona.com for this awesome opportunity! The Event was a lot of fun, way more than just a basic Movie viewing. Radio stations Power 98.3 & 101.9 were there giving away a ton of free branded merchandise, as you’ll see below, & playing some great music. I was genuinely surprised no one started a dance party, especially when they started playing “The Wobble”! I posted a video of the theater filling up on my Twitter, go check it out & Follow me: @MissAl_Leigh. Keep scrolling to watch the trailer for “Central Intelligence” & read my Review – I’ll try to keep SPOILERS to a minimum! 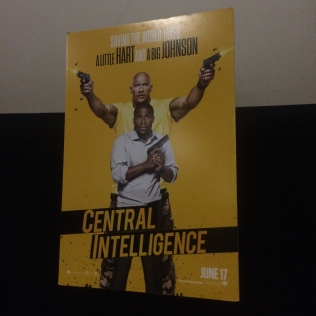 I got the last one! It says “Saving the world takes a little Hart & a big Johnson”

As you can see from the trailer, the basic plot is that Hart’s character, Calvin, & Johnson’s character, Robby are high school classmates with very different social standing. Calvin is Prom King & basically Captain of every sport, voted Most Likely to Succeed & dating the prettiest girl in school. Robby is an overweight goofball that’s a social outcast, an easy target for bullies. Flash forward 20 years & Calvin definitely doesn’t have the amazing successful life he imagined. He married his high school sweetheart & now works as an accountant. The day before their 20 year High School Reunion, Calvin is reunited with Robby – now Bob Stone. Bob Stone is, of course, in way better shape, but the same lovable, if a tad bit annoying, goofball – & he’s also a human weapon employed by the CIA. Bob involves Calvin in his latest mission which twists & turns until Calvin has no idea who to trust! Underneath the huge muscles, is Bob still that misfit from High School, who now needs his help to save the world? Or is he really a dirty CIA Agent hell bent on killing whoever gets in his way? Calvin & Bob must overcome many obstacles on the road to clearing their names in this Action Comedy that has a really sweet message about friendship & learning to love who you are.

Rating: B
Usually I split my Movie Reviews into Likes & Dislikes, but there wasn’t anything I DISLIKED about “Central Intelligence”. I just didn’t really connect with it enough or find it hilarious enough to give it an A rating. It’s definitely funny & there were quite a few moments that had the whole audience laughing out loud. However, if you’re not a fan of Kevin Hart, you most likely won’t enjoy this film. He’s a “big” actor, but I have the same sense of humor/style of comedic acting, so I guess I’m biased! The writing is clever, pay close attention for a few lines that reference other characters the cast has played. For example, a line about Bob looking like Hercules – a character Johnson has played. Also, there are some awesome cameos for fans of “Breaking Bad”, “Arrested Development”, & “Bridesmaids”. This film was relatively tame in terms of language & violence which I was kind of surprised by. Plot wise, the details of the CIA storyline hardly matter. The real story is the developing friendship & character growth that occurs between Calvin & Bob. The end is predictable & slightly cheesy, but was nice to see in a mostly male cast action/comedy/buddy film. Character-wise, I liked that Calvin is honestly a good guy. I appreciate that he wasn’t some bad boy jock getting his comeuppance by becoming a paper pusher. I think more people can sympathize with a nice character that had a bright future ahead of him – & just turned out to be average. There’s nothing wrong with it, but I think many of us can identify with having big dreams, only to wake up to a reality that’s much different. All in all, I would definitely recommend this film for anyone looking for a movie that’s fun but also has a lot of heart – no pun intended!

For a chance to win a Sneak Peek of your own for an upcoming film & to check out all sorts of cool restaurants, local spots, spas, donut shops, etc, in Arizona, please Follow Fabulous Arizona on their website, Instagram, & Twitter!

While you’re at it, please Follow me here on MissAl-Leigh.com, Instagram, & Twitter! Let me know if you plan on going to see “Central Intelligence” or once you’ve seen it, Comment below what you thought! What other movies are you planning on seeing this summer?! Thanks for reading 🙂